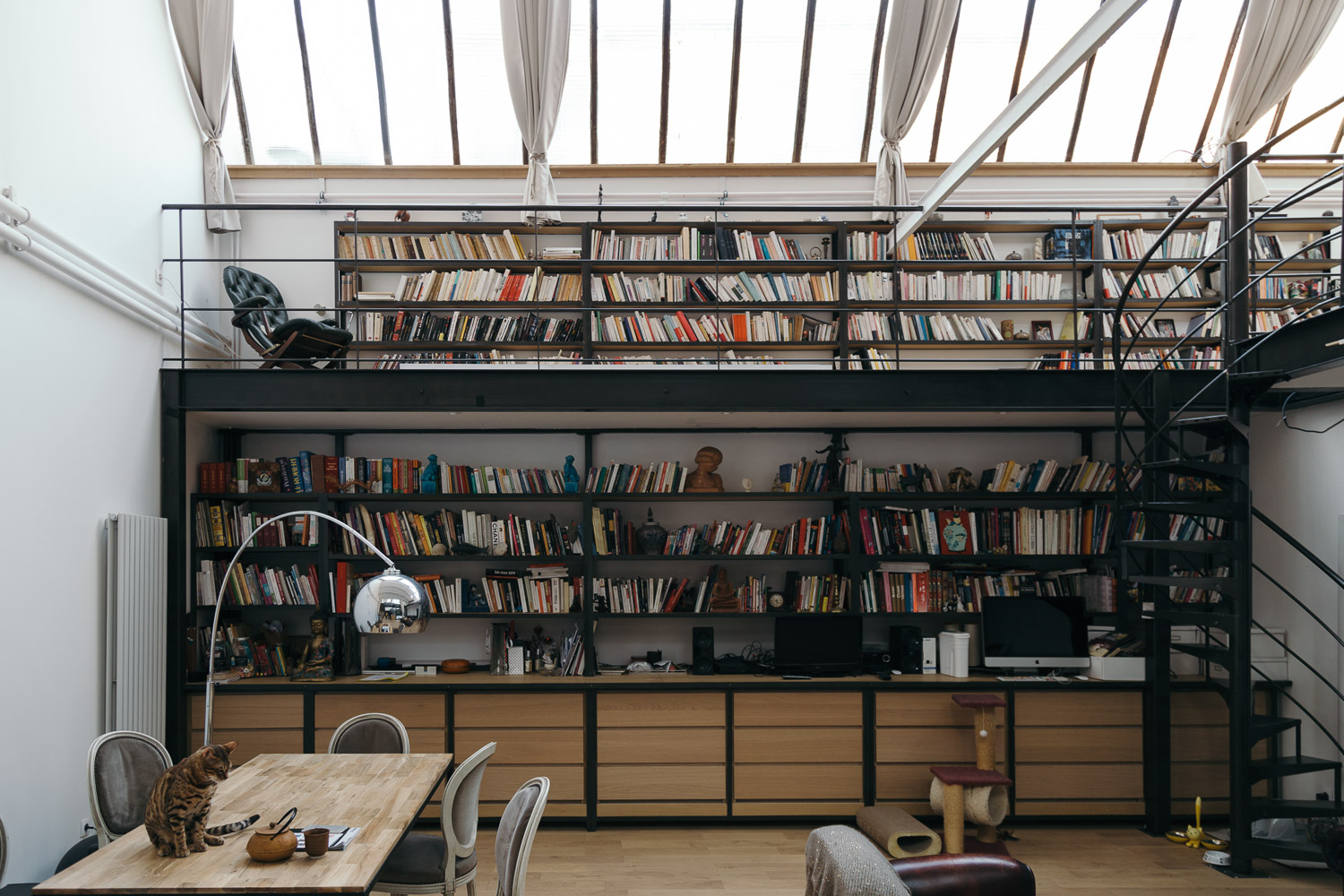 Posted at 10:30h in Bibliothèque de ville, Portait, Uncategorized by The Archivists 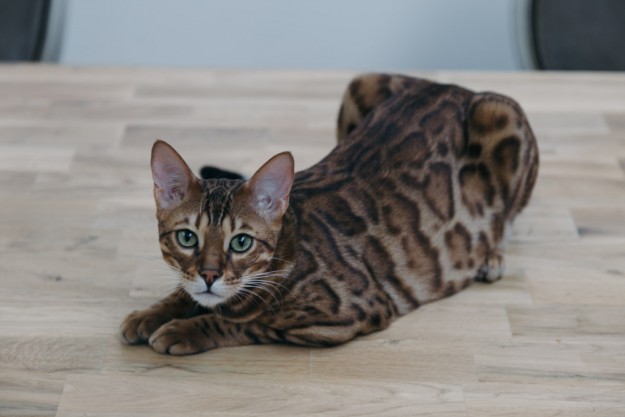 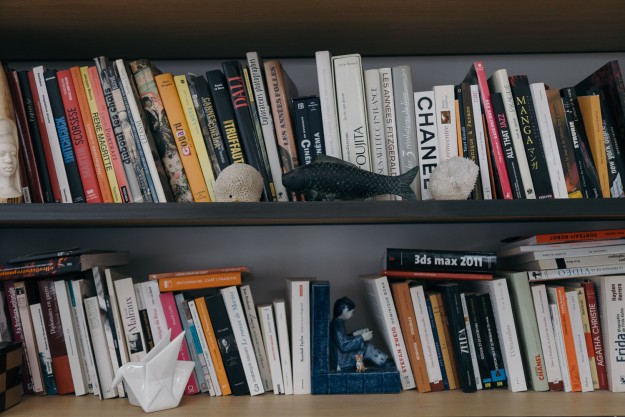 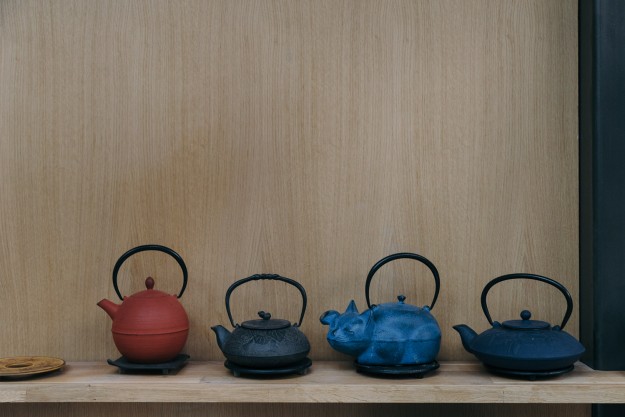 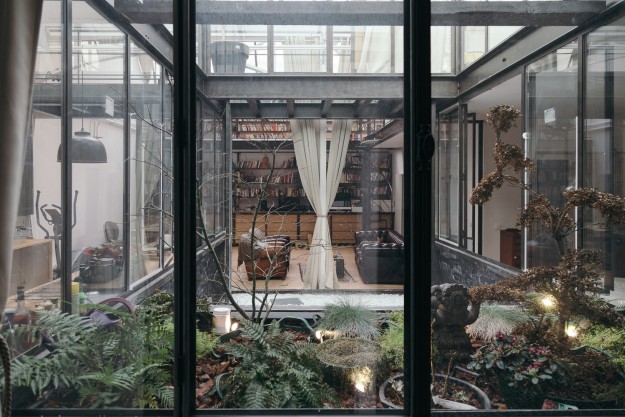 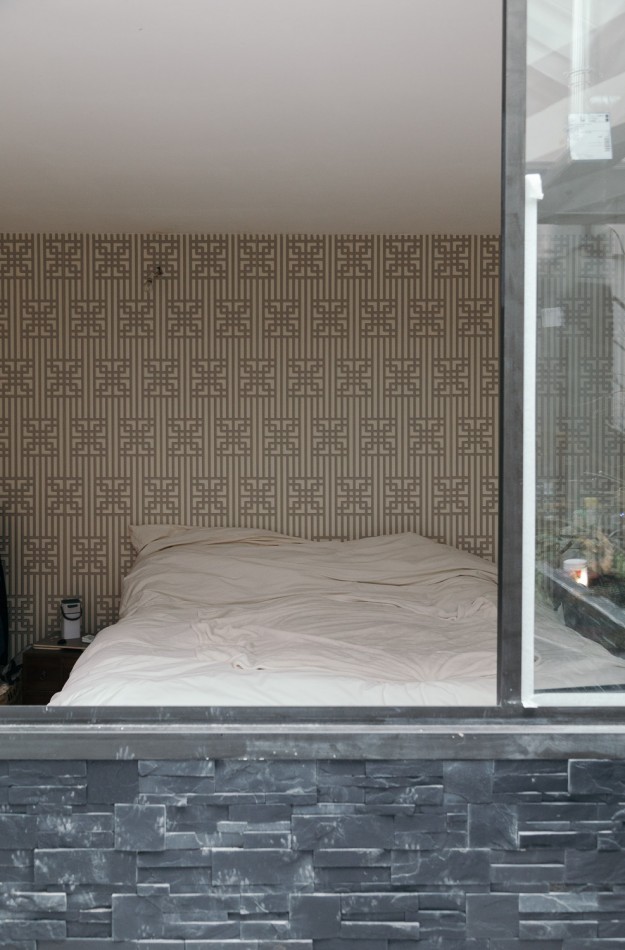 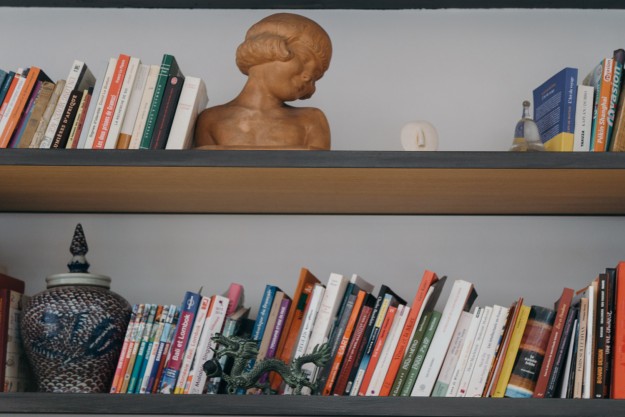 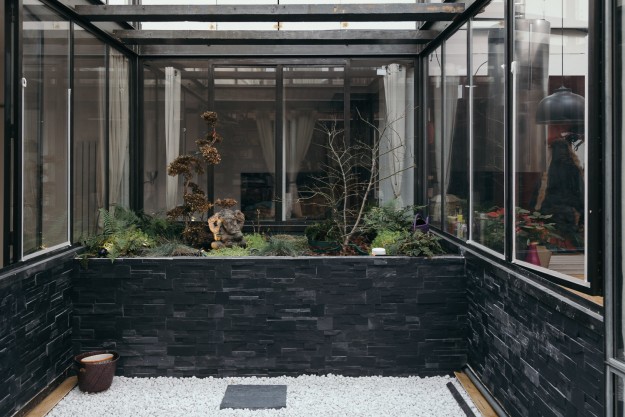 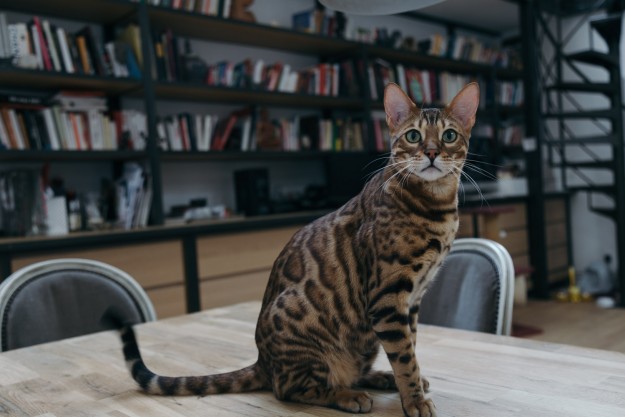 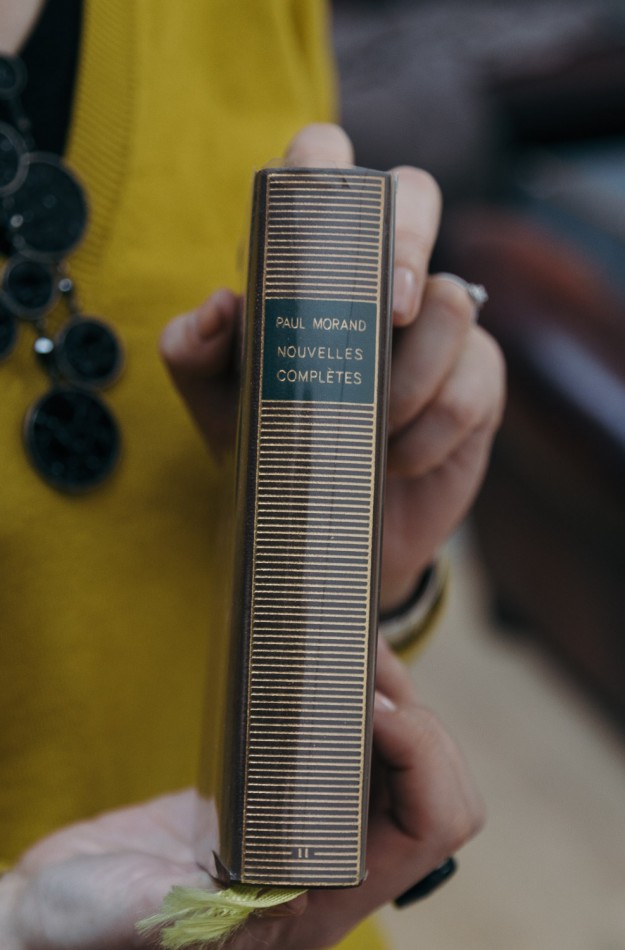 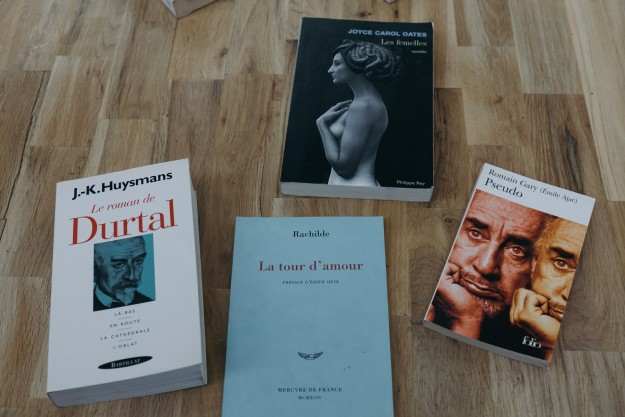 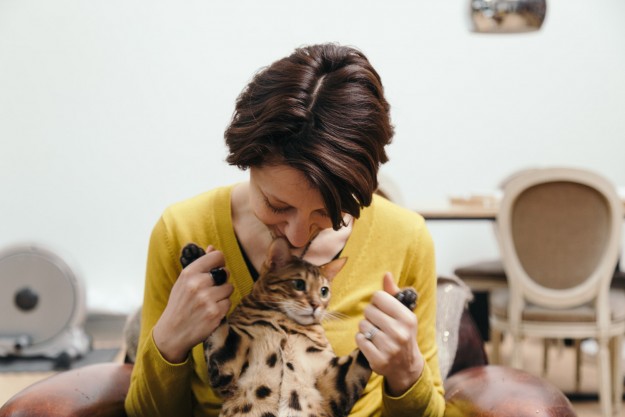 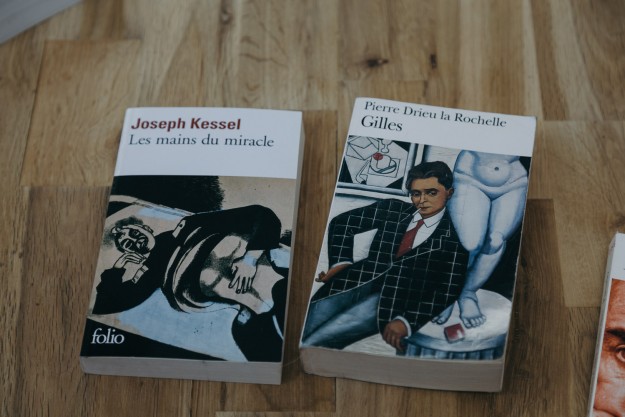 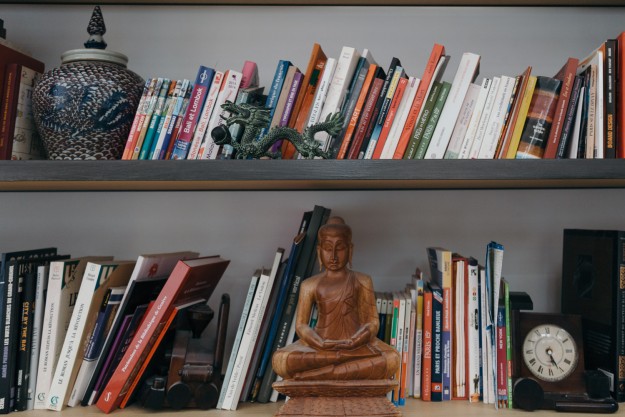 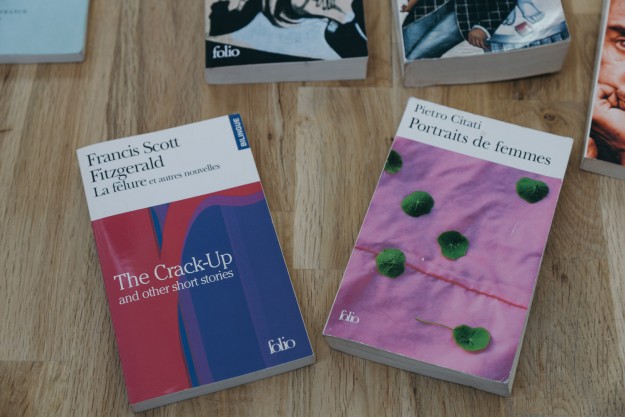 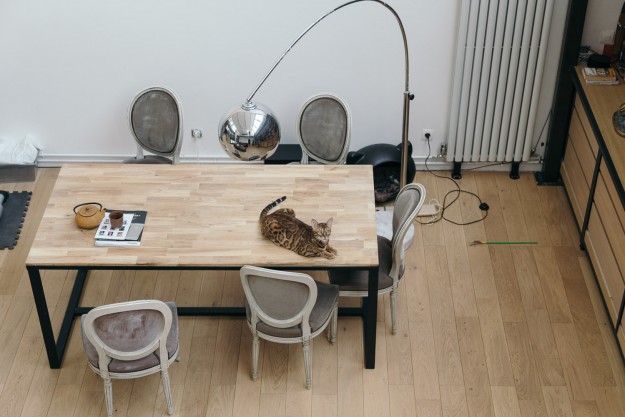 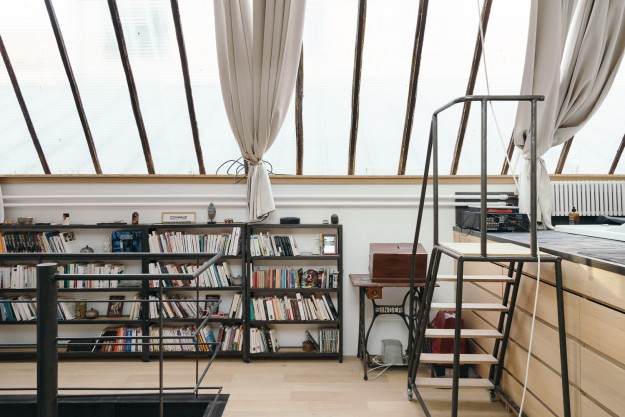 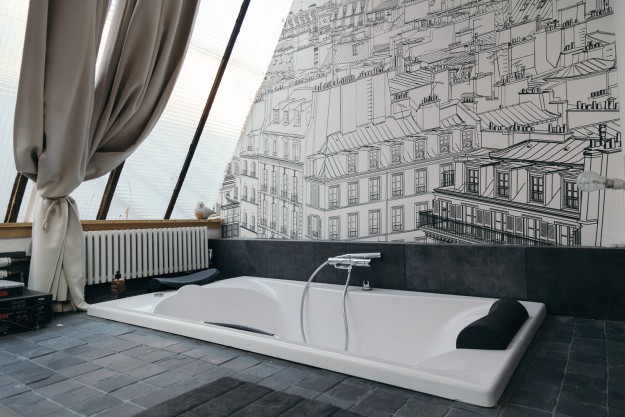 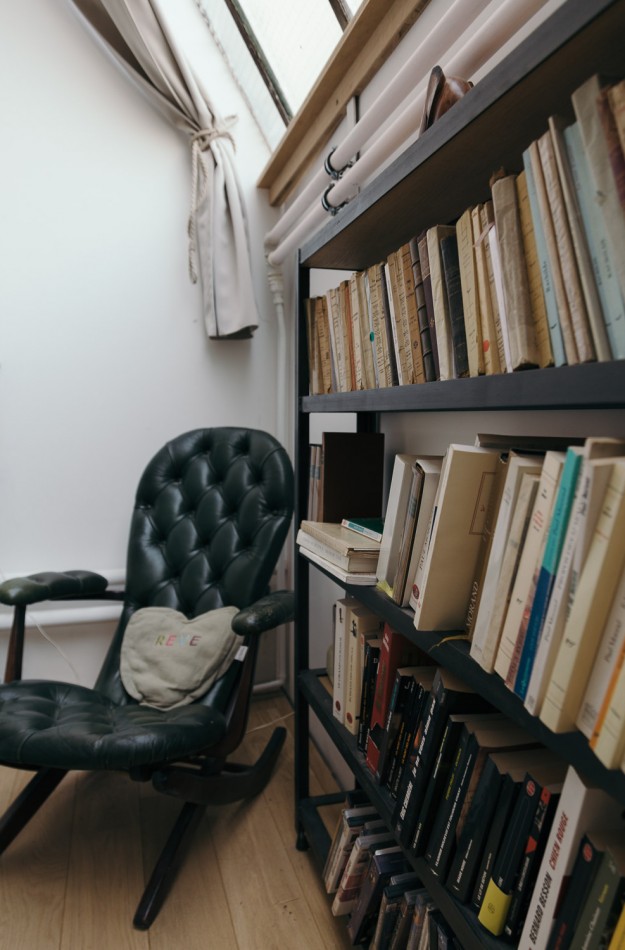 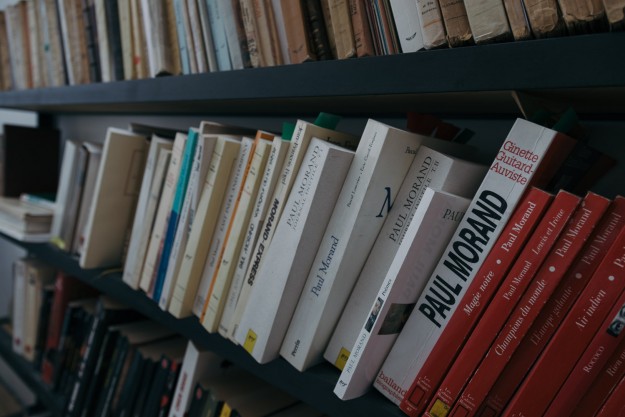 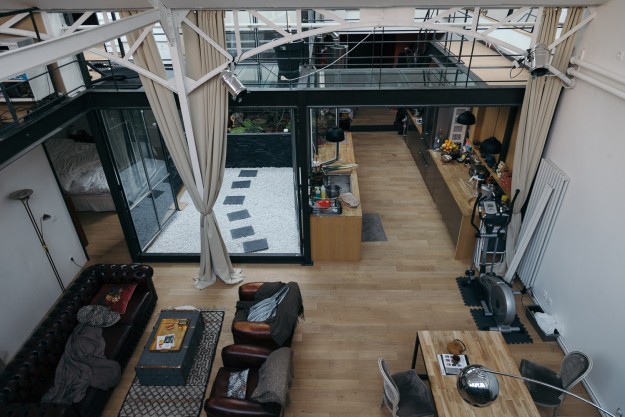 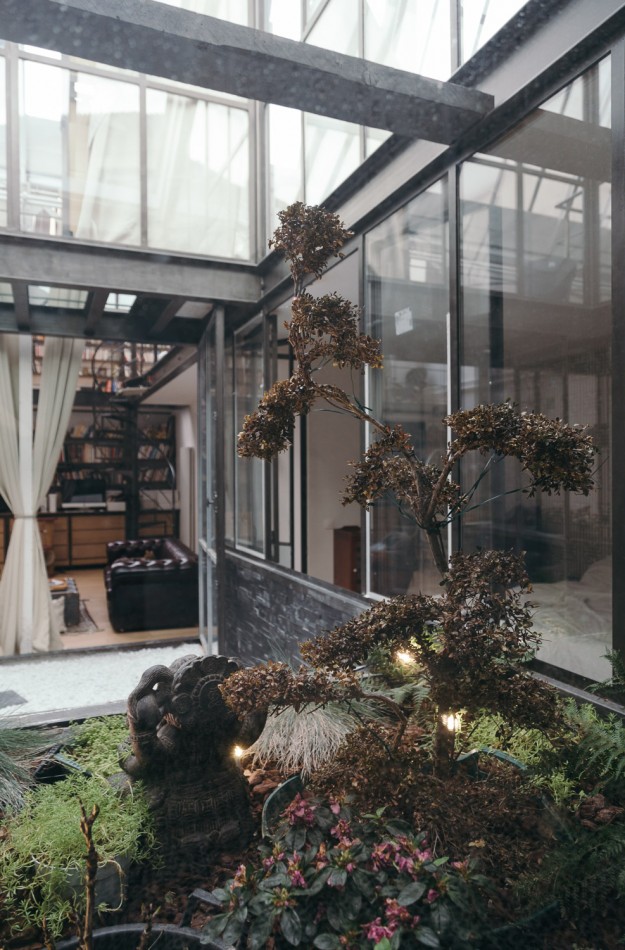 Sophie’s bookcase has been made to measure. “And it is home-made!” she adds with some pride. The idea of this bookcase was born from a wish: to be able to embrace all the books on a single look. “When I was living in Paris centre, I had a puzzled bookcase, with small stacks of books in every corner of the house, and it was frustrating.” When she visited this former photographer studio in Montreuil, she instantly saw the potential of this big wall under a glass roof. This place would welcome the bookcase of her dreams. “We chose the same materials than for the rest of the loft: wood and steel.” A friend helped them with the welding work and the lower part of the bookcase, simply comes from Ikea. Sophie just gave us the recipe of an amazing bookcase. “I am so happy with his bookcase, she recognizes. I see my forest of books everyday, it is like a landscape.”

Sophie has always been a reader, a regular reader she says, a reader of novels mainly. “Reading is like eating actually. But it is also a private activity. It is something you do everyday and alone.” Amongst her favorite books she names the ones of the French author Rachilde (1860-1953). “I collect her books. She has a fascinating universe and is herself a fascinating woman. My interest for her is also the result of a friendship with a wonderful bookseller who spots for me the beautiful editions of Rachilde’s work.” Other important authors: Isaac Bashevi Singer, Joyce Carol Oates, René Char or Anna Akhmatova. “These are my personal encounters but before that there was my literary studies with the shock of the classics such as Rousseau, Musset, Flaubert, Hugo, Anouilh and many others.” Sophie believes than an author is all about an encounter: “I had the occasion to read Proust quite early but it is only a year ago that I really met him. Same with André Malraux whom I really met when I was 30, and not younger when I first read him.”

For Sophie, the bookcase is really an essential element of the house: “It is the hearth, the fireplace, the symbol of the place that I call home.” Although another “element” is reigning supreme at Sophie’s place: Luchador, the Bengal cat. “My purring masterpiece… Cat and bookcase are the perfect duo for a home sweet home” she says grabbing her beautiful cat. And that cat loves paper, books smell and walking through the shelves. “His universe is the lower part of the bookcase. He leaves me the upper part: he understood that this part is my own nest!” she concludes.

A FEW BOOKS TO BORROW FROM SOPHIE:

Dalva by Jim Harrisson: From her home on the California coast, Dalva hears the broad silence of the Nebraska prairie where she was born and longs for the son she gave up for adoption years before. Beautiful, fearless, tormented, at forty-five she has lived a life of lovers and adventures. Now, Dalva begins a journey that will take her back to the bosom of her family, to the half-Sioux lover of her youth, and to a pioneering great-grandfather whose journals recount the bloody annihilation of the Plains Indians. On the way, she discovers a story that stretches from East to West, from the Civil War to Wounded Knee and Vietnam — and finds the balm to heal her wild and wounded soul.

The Female of the Species by Joyce Carol Oates: A young wife is home alone when the phone rings in “So Help Me God.” Is the strange voice flirting with her from the other end of the line her jealous husband laying a trap, or a stranger who knows entirely too much about her? In “Madison at Guignol” an unhappy fashionista discovers a secret door inside her favorite clothing store and insists the staff let her enter. But even her fevered imagination cannot anticipate the horror they have been hiding from her. In these and other gripping and disturbing tales, women are confronted by the evil around them and surprised by the evil they find within themselves. With wicked insight, Joyce Carol Oates demonstrates why the females of the species—be they six-year-old girls, seemingly devoted wives, or aging mothers—are by nature more deadly than the males.

The Man from Beijing by Henning Mankell: January 2006. In the Swedish hamlet of Hesjövallen, nineteen people have been massacred. The only clue is a red ribbon found at the scene. Judge Birgitta Roslin has particular reason to be shocked: Her grandparents, the Andréns, are among the victims, and Birgitta soon learns that an Andrén family in Nevada has also been murdered. She then discovers the nineteenth-century diary of an Andrén ancestor—a gang master on the American transcontinental railway—that describes brutal treatment of Chinese slave workers. The police insist that only a lunatic could have committed the Hesjövallen murders, but Birgitta is determined to uncover what she now suspects is a more complicated truth. The investigation leads to the highest echelons of power in present-day Beijing, and to Zimbabwe and Mozambique. But the narrative also takes us back 150 years into the depths of the slave trade between China and the United States—a history that will ensnare Birgitta as she draws ever closer to solving the Hesjövallen murders.

Shibumi by Trevanian: Nicholai Hel is the world’s most wanted man. Born in Shanghai during the chaos of World War I, he is the son of an aristocratic Russian mother and a mysterious German father and is the protégé of a Japanese Go master. Hel survived the destruction of Hiroshima to emerge as the world’s most artful lover and its most accomplished—and well-paid—assassin. Hel is a genius, a mystic, and a master of language and culture, and his secret is his determination to attain a rare kind of personal excellence, a state of effortless perfection known only as shibumi.

Now living in an isolated mountain fortress with his exquisite mistress, Hel is unwillingly drawn back into the life he’d tried to leave behind when a beautiful young stranger arrives at his door, seeking help and refuge. It soon becomes clear that Hel is being tracked by his most sinister enemy—a supermonolith of international espionage known only as the Mother Company. The battle lines are drawn: ruthless power and corruption on one side, and on the other . . . shibumi.