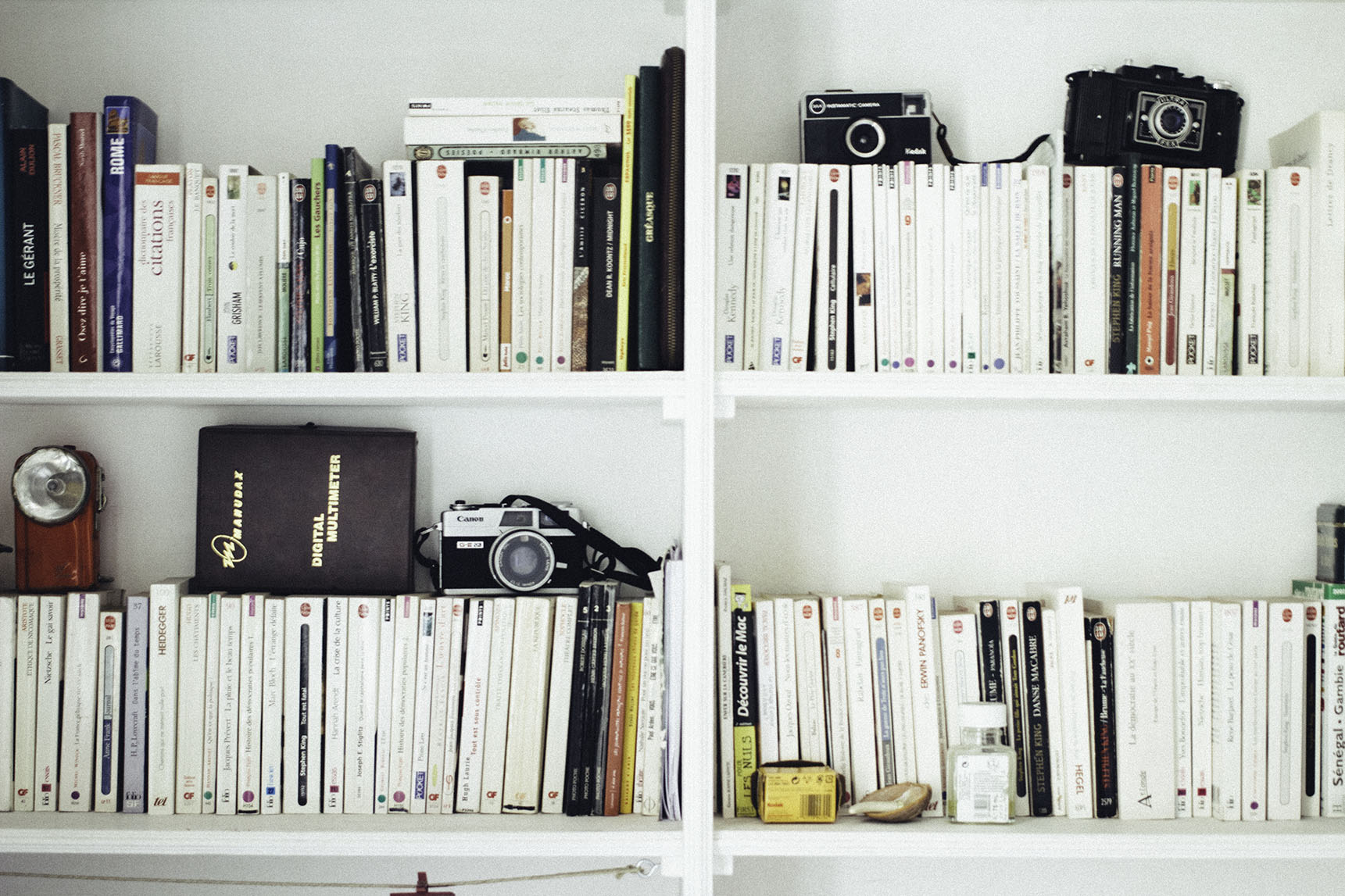 Posted at 10:12h in Bibliothèque de ville, Portait by The Archivists

Romain likes music, both to listen to and to make. When entering his living room, our eyes are drawn to guitars, a large collection of records and a record player that is open, as if in an invitation to put a song on. Meanwhile, the books are in the bedroom, undoubtedly because it’s easier to read in bed than to play the guitar there. For Romain, the bookcase is sacred, almost as much as the books themselves. He keeps them all after reading. He still has every book he ever read and studied in high school and college. His copy of Illuminations by Arthur Rimbaud belonged to his mother. Books are made to last.

In the bookcase, on top of the books, in front of the books, and behind the books, are different items that each evoke memories for Romain: a bag of marbles from his childhood, his grandfather’s cameras, the gift his best friend gave him for his 8th birthday… But this altar is not stuck in the past. There are also recent books and things that Romain likes to collect. They continue to tell his story.

When music came into Romain’s life – during his adolescence – he became almost insatiable: he needed to know everything, to listen to everything. Today, he focuses more on what he really likes. Romain had this exact same thirst for discovery with literature, although it came about later, which he regrets. He admits that for years he read everything he could without making any real choices, as if he wanted to make up for lost time. Now, he is more demanding, he chooses according to his tastes and they lead him naturally toward American literature, which resembles the music he likes to listen to. Capote, Faulkner, Roth, Hammett. These books have atmospheres, moods and characters that correspond to Romain’s idea of America. But he remains open to new readings: “After reading In Cold Blood by Truman Capote, I read The Adversary by Emmanuel Carrère” he explains. There is a coherent path; both belong to the non-fiction novel genre.

During his childhood, in his family’s apartment, there were books everywhere. Romain’s mum always had a book on hand. But on Sundays she liked to put her book down, open the windows, put a record on the record player – the same one that is now at Romain’s place –and take care of her home. It was always the same music: the “Best Of” of Elton John, Dire Straits and Francis Cabrel – a very 90’s French singer. Romain would lie down on his mother’s large bed and read and reread the lyrics of the songs printed on the back of the record covers. Even then, reading and music went hand in hand in Romain’s mind. After all, records and books both tell stories.

A FEW BOOKS TO BORROW FROM ROMAIN:

The Long Walk by Stephen King, Signet: “For the sociological dimension rather than the horror”. Romain likes how Stephen King sets the scene, how he represents America.

The Adversary by Emmanuel Carrère, Bloomsbury

Red Harvest by Dashiell Hammett, Knopf: “Very cinematographic, it’s like Humphrey Bogart is talking to me!”