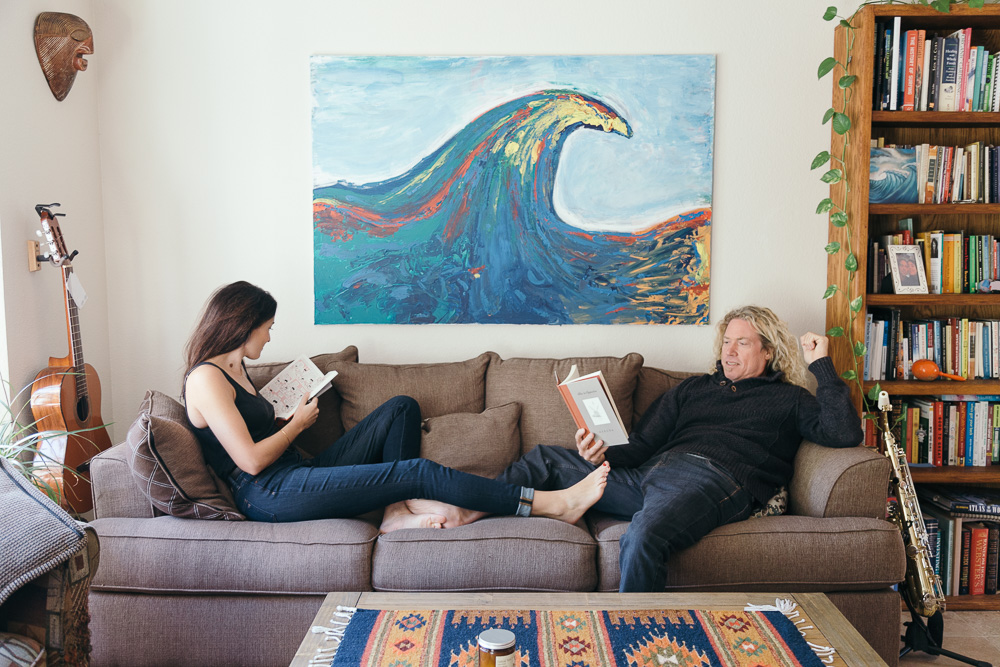 Posted at 13:39h in Portait, Uncategorized by The Archivists

The bookcase – California. Ventura County. South East of Santa Barbara: following a road through the hills, we arrive in Ojai, charming small town where Marleen and Derek live. As usual, when entering their house, we focus on their bookcases. Two of them come from an upcycling shop. Marleen explains: “They gather all sort of items and furniture that people get rid of, then give them a new life and re-sell them.” Upcycling is a state of mind. “We are both sensitive to the environment and we are trying to consume less and in a better way.” Marleen and Derek both work as literary agents and they met through books. “They are therefore very important elements in our house but also in our life!”

The classification (“if there is really one!” adds Marleen) has evolved organically. “I would say that it is by genre: cookbooks, travelogues, literature, business books… But it is not that organised. We often spend time going through several bookcases looking for a specific book” she admits.

Readings – Marleen and Derek are both voracious readers. “We are always reading and we often read several books at the same time.” Their job is certainly partly responsible. They read the books they represent, but also the ones they hear about through friends or in the press. They are always discovering more books to read and to add to their never ending reading list.

Derek favours nonfiction but he can read a novel from time to time. Marleen has a penchant for literature but she ends up reading quite a lot of nonfiction as well. Their bedside tables say a lot. Marleen explores hers: « In my iPod, I have the audiobook of Sapiens by Yuval Noah Harari. And in physical format (she sorts it out): Barbarian Days by William Finnegan (in the original version), Men without Women by Haruki Murakami in Dutch (Marleen is from Holland!), The Sympathiser by Viet Thanh Nguyen (French version) and The Entrepreneur Rollercoaster by Dan Hardy (in English as well). Nice mix!

We move to the other side of the bed to explore Derek’s bedside table: Tools of Titans by Tim Ferris, The Wisdom of No Escape by Pema Chödrön, Narcissus and Goldmund by Hermann Hesse, Open by Andre Agassi and Stumbling upon Happiness by Daniel Gilbert.

There are the books we see, on the shelves, on the tables, but there are also the ones that are absent but live inside the reader. The books that construct. The ones that feed, that appease, that leave a mark on one’s life. Marleen cites the books of Virginia Woolf, especially To the Lighthouse. “I haven’t read it since college, but I would like to read it again. I am sure it would feel differently now.” And she also evokes the graphic novels series The Arab of the Future by Riad Sattouf whose rights she represents worldwide. “These books have been such an important step in my career as an agent. Many doors opened thanks to them and I adore them as a reader as well!” For Derek it is harder to make a choice: each book he’s read has its importance. He finally cites Siddharta by Hermann Hesse and The Awakening of Intelligence by J. Krishnamurti.

Beginnings – Marleen and Derek haven’t always been such big readers. For Marleen, it started in high school thanks to her professor of Dutch literature. “No one liked him and he didn’t seem to like anyone either, but in spite of that I was moved by his classes about classic Dutch authors such as Multatuli, Gerard Reve, Louis Paul Boon, W.F. Hermans.” Love for literature can come through unexpected ways. Derek confides: “I started to read after college, when I took a year off to travel around the world.” Who said that reading was a sedentary occupation?