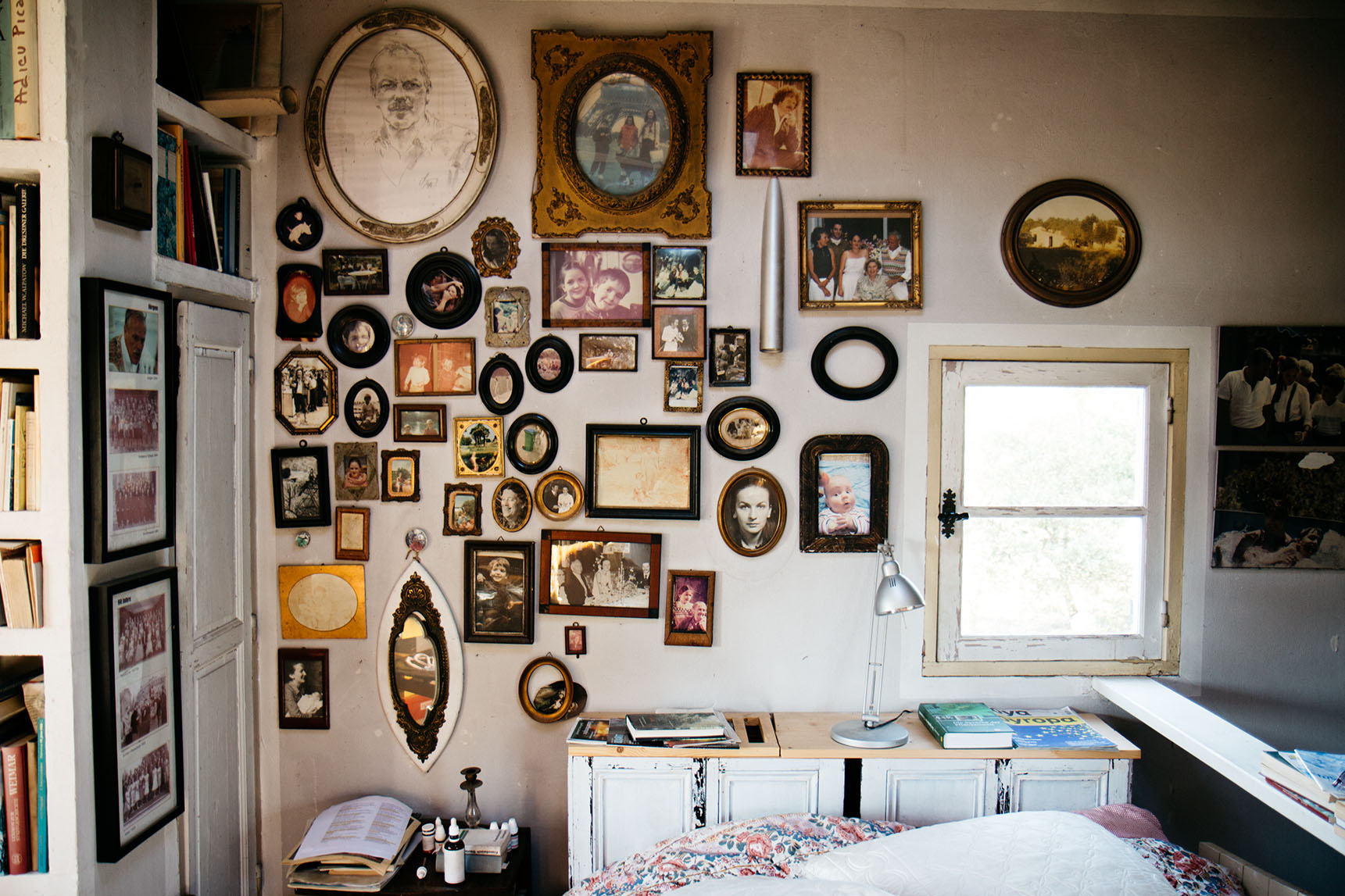 Posted at 10:33h in Portait by The Archivists

We drive a few kilometres on a rocky path amongst the hill. Fields of olive trees on one side, big old oaks on the other side. When we start thinking that we might be lost, we see a portal. Exceptional places are often hidden. We are delighted at first look. And the bookcase is easy to spot: it is under a big glasshouse. Maria and Jurgen, both German yet perfectly fluent in French, have been living here for more than forty years. They fell in love with the region in the 70’s and bought, on a whim, a small stone cottage that was in a very bad shape. They then discovered a second house that had been entirely covered with brambles. Since they have renovated both houses, they organised the garden and are cultivating the olive trees. Life goes on quietly between the two little houses on what look like a little village central square. It is the heart of the house and there is no roof upon the heads.

Since they retired, Maria and Jurgen now live here all year long. They always shared their life between Provence and Hanover in Germany where they ran an organic restaurant – long before organic was a trend. The glasshouse that hosts their bookcase is actually a “piece” of their restaurant. In summer, the heat is quite intense there. But from fall to spring, the bookcase becomes a place to live.

Books and philosophy of life

Under the glasshouse are mainly the books of Maria who is deeply interested in “the relationship between food and health”. She has many books about it and makes a concrete application of what she reads by cooking delicious and healthy meals. Most of the books are in German obviously. But she finds for us a French book: The Kousmine method that gives keys for a healthy alimentation. The balance between health and pleasure is a real way of life for Maria and Jurgen. And Jurgen, inspired by their experience and thoughts, has written a manifesto for a more simple and happier life.

Jurgen recognizes that he reads less since he writes. But to be surrounded by books is still very important for him. “If I want to see a picture of my life, I look at my bookcase and with one glance I can seize it”. Like a photo album. Examples: Death of Virgil by Hermann Broch? “This book was given to me when I was 13”. He found in it the premises for a reflexion about life that he keeps meditating. Books by Friedrich von Schiller, the revolutionary brother of Goethe: Jurgen loved reading it when he was young. But as he got older, Goethe’s works eventually won his heart.

The sun is going down. We didn’t notice it but some rosé is waiting for us on the table and the pizza oven is heating up. Jurgen tells us a last secret: “All men are equal but above us all there are three persons: Mozart, Goethe and Picasso!”

A FEW BOOKS TO BORROW FROM MARIA & JURGEN:

Gut: The Inside Story of Our Body’s Most Underrated Organ by Giulia Enders, Greystone Books: A cheeky up-close and personal guide to the secrets and science of our digestive system.

Death of Virgil by Hermann Broch, Vintage: It is the reign of the Emperor Augustus, and Publius Vergilius Maro, the poet of the Aeneid and Caesar’s enchanter, has been summoned to the palace, where he will shortly die. Out of the last hours of Virgil’s life and the final stirrings of his consciousness, the Austrian writer Hermann Broch fashioned one of the great works of twentieth-century modernism, a book that embraces an entire world and renders it with an immediacy that is at once sensual and profound. Begun while Broch was imprisoned in a German concentration camp, The Death of Virgil is part historical novel and part prose poem — and always an intensely musical and immensely evocative meditation on the relation between life and death, the ancient and the modern.