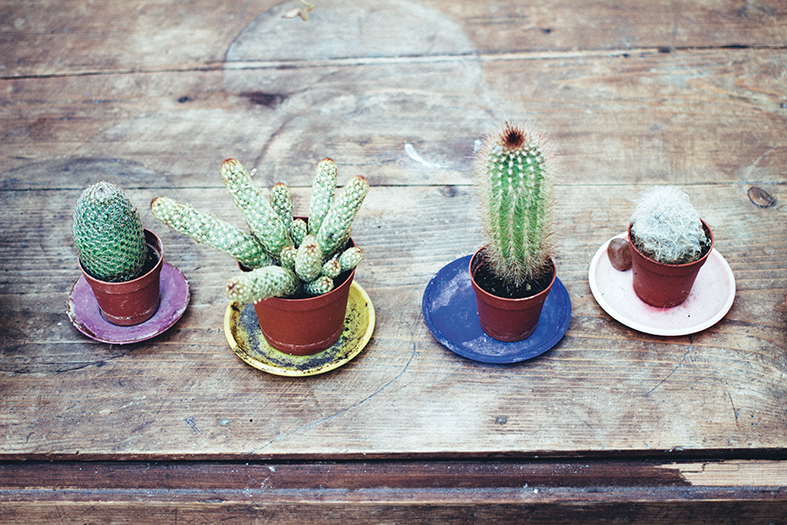 Posted at 09:28h in Portait, Uncategorized by The Archivists

We walk along a small street, cross a garden that spreads over several levels, wave to the neighbours, shoot an intrigued glance at Louis and Anne-Laure’s old-fashioned veranda, and finally enter their living room. No need to look for the bookcase, it’s right there, in front of us, occupying a big wall from floor to ceiling. The former owner of the house, a carpenter, made it. Anne-Laure and Louis did not hesitate to keep it. “Books were the first things to be unpacked. Our friends, who helped us move in, were still there” they remember, laughing. Books are not really sorted or classified, although some of them, probably because of their beautiful covers, are exposed. The whole effect is very colourful and lively. Here, books are not simply soulless objects. Anne-Laure and Louis have two daughters – Augustine, who is 6-years-old and Agnès, who is 3-and-a-half years-old. The lower shelves house books that the girls can take, browse, play with. Books should not be intimidating. “In our home, there’s no permission needed to open a book!” says Louis, who remembers that at his parents’ place, books were nothing to joke about.

Anne-Laure and Louis are two different kinds of readers. Anne-Laure reads everyday, while commuting, and in bed at night. “Stories allow me to travel to universes and countries I don’t know”, she says. On the shelves, we guess that the foreign literature mainly belongs to her, and we are right, although Anne-Laure is not really aware of this preference. She likes books that develop her imagination. For her, reading is about escaping. She can’t remember the title of the book she is reading at the moment. She grabs her bag and takes out The Lewis Man by Peter May. A crime novel set in Scotland. A guaranteed change of scenery!

For his part, Louis describes himself as an “unconfident and off-and-on” reader. He wonders: “If I don’t read every day, am I really a reader?” The answer seems obvious and can be seen on the bookshelves. Do Jorge Semprun’s novels belong to Anne-Laure? “No, but they were a gift from her!” Semprun, this is the kind of literature Louis likes: “It’s a mix between introspection and history”, he explains. He has read Semprun’s whole body of work, he confesses, as if he only just realised it. His hand slides over the books and grabs a comic: Calvin & Hobbes by Bill Watterson. Now we’ve moved to a completely different genre altogether. “When I discovered Calvin and his tiger Hobbes in an American magazine as a teenager, I laughed so hard”. If reading could be fun, he was saved. And he’s never stopped reading ever since.

A part of one’s self

Books shouldn’t be frightening. “As a kid, I couldn’t bear that we weren’t allowed to touch books”, explains Anne-Laure. Ever since, and probably as a reaction to her parents, she tries not to be attached to the physical object. A book has to live, get dog-eared, stained… And it doesn’t belong to anyone, each reader can adopt it. She loves public libraries: to borrow books, give them back, lend them, abandon them. And their bookcase is open to guests. “I like the idea of exchanging books and everyone leaving a part of themselves in them”.

A FEW BOOKS TO BORROW FROM ANNE-LAURE AND LOUIS:

The long voyage by Jorge Semprun, Overlook Books, 1963: an autobiographical novel in which the author talks about the five days he spent on a train on his way to Buchenwald camp. “The first-person narration in the present tense makes you live what he lives. I had the feeling he was talking directly to me”.

The Complete Calvin and Hobbes by Bill Watterson, Andrew McMeel Publishing, 2012: the hilarious adventures of a six-year-old boy and his sarcastic stuffed tiger.

Purge by Sofie Oksanen, Grove/Atlantic, 2010: this novel flips back and forth between the past and the present, following Estonia from before the Stalinist deportations of 1949 until after independence in 1991, through the destinies of two women from different generations.

Black girl / White girl by Joyce Carol Oates, Ecco, 2006 : a great novel about the racial question in the US.