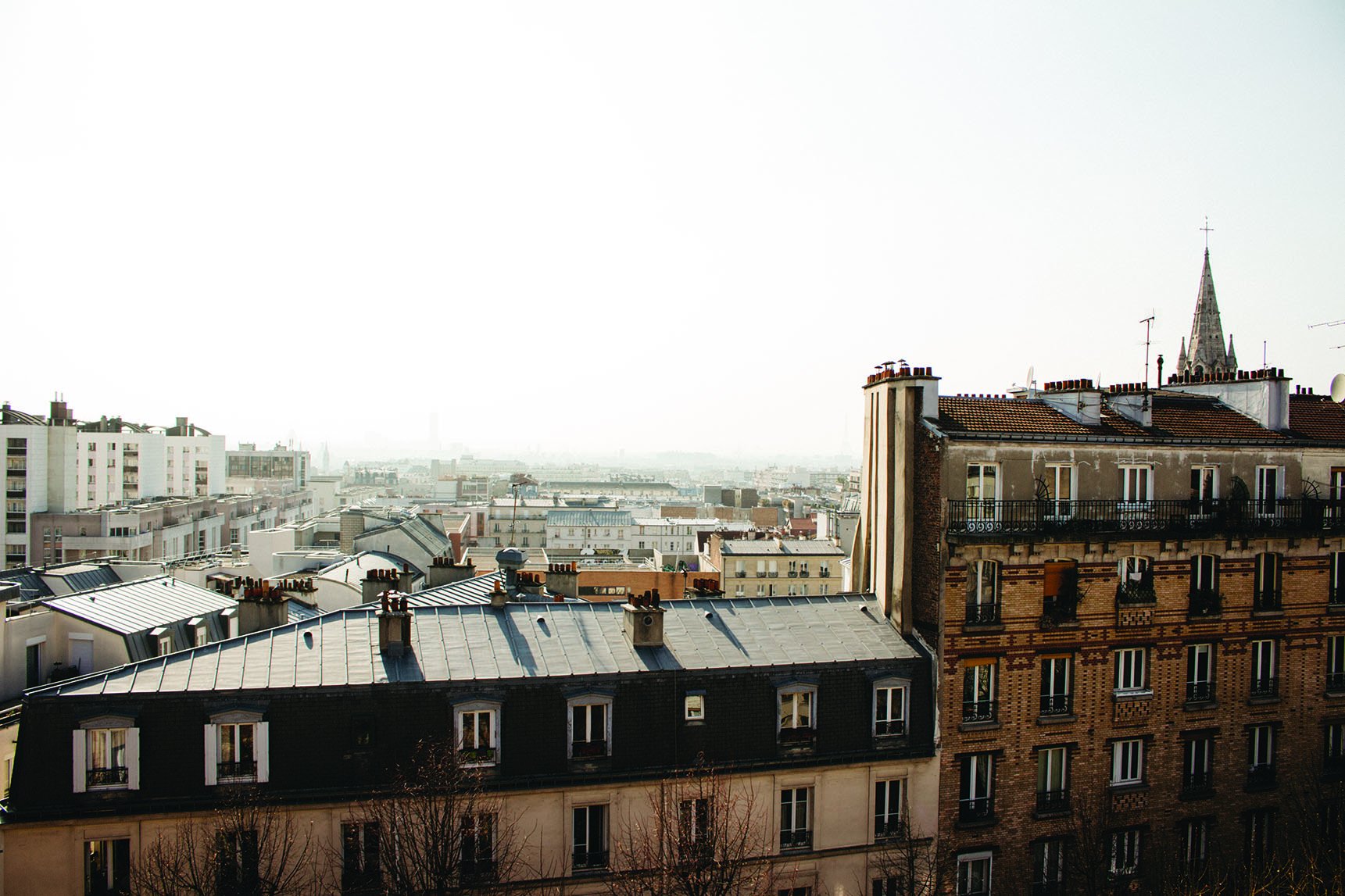 Agnes admits it, when we enter her place, “we can almost touch the sky”. From this flat whose atmosphere is very minimalist, the view on Paris is amazing. We dominate the capital and feel like on board of a big boat. Maybe that’s why Agnes puts her sunglasses on. And books are part of the trip. Agnes is not someone who thinks about the organisation of her bookcase. The books are here, close to her and that’s all that matters. We nevertheless identify – thanks to the colours of the book covers – an intuitive and practical arrangement by publishing houses. The small table on which she writes – her novels but also her searches – moves around in the room, following her mood. When Agnes wants evasion, the table goes by the window. When she wants to feel surrounded and supported, she moves by the bookcase. But she can write everywhere especially the novels that are really pure pleasure for her.

Agnes reads a lot, both essays and novels. For the novels: mainly French contemporary literature. She follows the contemporary literary scene and often has some very good surprises. “But if I have to think about some more classic references, I would say that Marguerite Duras in on my top list”. Lately, she tried to read some crime novels – “with the idea of writing one” she says laughing. But the test was a fail: “I was scared…”

Agnes teaches gender studies in Geneva. So she reads about that quite a lot: Foucault and Barthes are the pillars. “But they are also real writers who know how to tell a story”.

Looking into her bookcase she grabs a book from Angelica Lidell, a Spanish playwright. “Her writing really moves me. She goes back to the catharsis, to the unspeakable.” A look by the window to this incredible view. “What is literature’s purpose if not moving us?” asks Agnes. We couldn’t agree more.

A few meters from the bookcase, we notice a small altar: statues, candles, incense… “You just found out my Asian corner!” says Agnes who was born in Bangkok. Every year she travels to Asia and brings back these objects. “Thanks to them I maintain a link between my two cultures: spiritually Budhist, intellectually from the West.”

A FEW BOOKS TO BORROW FROM AGNES:

Herculine Barbin: Being the Recently Discovered Memoirs of a Nineteenth-century French Hermaphrodite, Pantheon: the diary of an hermaphrodite who was designated female at birth, then reclassified as a man and eventually committed suicide at the age of thirty. Published with a very interesting preface by Michel Foucault.

Gender Trouble by Judith Butler, Routledge: published in 1990, it is considered as one of the canonical texts of queer theory and postmodern poststructural feminism.

Middlesex by Jeffrey Eugenides, Farrar, Strauss and Giroux: Spanning eight decades – and one unusually awkward adolescence – this great American novel is a grand, original fable of crossed bloodlines, the intricacies of gender, and the deep, untidy promptings of desire. Highly recommended!