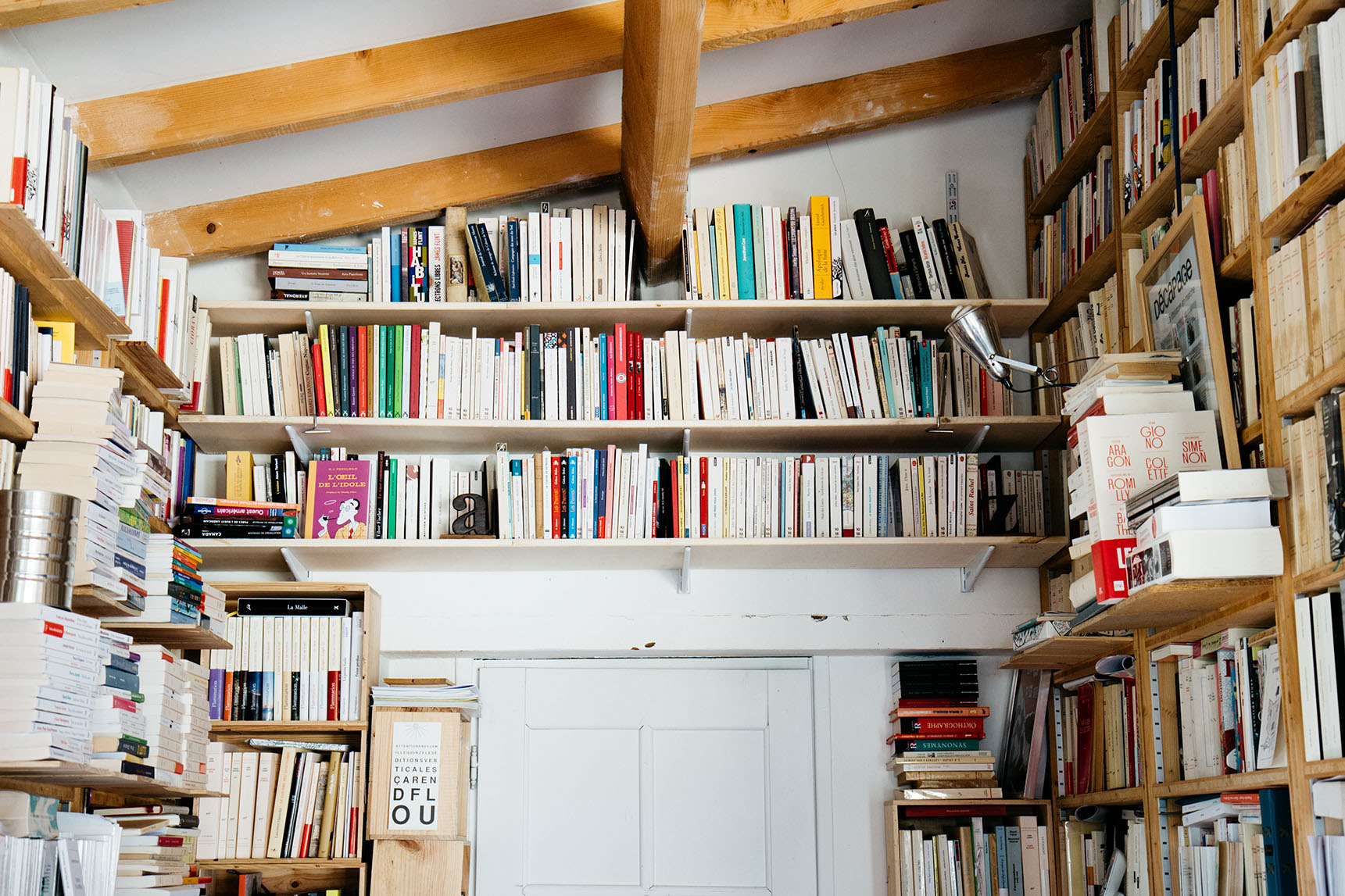 Posted at 09:42h in Bibliothèque d’auteur, Portait, Uncategorized by The Archivists

Bookcase – We reach Jean-Baptiste’s house after a long ride in the countryside. We enter the house and find him, working at his desk, surrounded by his books. Again, a made-to-measure bookcase with shelves going from floor to ceiling. “I am lacking of space so I am adding extra shelves where books pile up” regrets Jean-Baptiste. And there is also the desk, at the centre of the bookcase, where the books to be read are forming new stacks. In the bookcase, books are classified by alphabetical order. A detail: here there is only French contemporary literature (from 1900). Classics and foreign literature are in another bookcase, somewhere else in the house – “because of a lack of space again”.

Reading – Jean-Baptiste was not a precocious reader. Before 17 he never opened a book, at the exception of a few Agatha Christie that left him pretty cold. At 17, while he is about to spend holidays in the Centre of France, a friend puts two books in his bag. Is he going to read them? Certainly not! Well, after two days of boredom, he grabs the first one: Journey to the end of the night by Céline. “Read it in one day”. The day after, he reads the second one. The title: The Counterfeiters by André Gide. And it is the beginning of everything. Randomly he starts reading a book of Milan Kundera and eventually reads his whole work. And it becomes a habit: “If I like an author, I read everything from him” explains Jean-Baptiste like if he was confessing a shameful practice. He remembers having been impressed by a reader who had read all Sartre. “All Sartre?” did he ask looking at the many books by the author. “Yes, but I read it slowly, reading each book at publication” explained this reader to Jean-Baptiste. And this is how he decided to focus on young French authors and to accompany them over the course of their work.

And from reading, Jean-Baptiste went to writing. He published his first novel at 24. And he has created a literary review. Reading then became a priority, a real job. “I have to read, mainly for the review. And also because I like to follow authors”. Sometimes, pleasure is forgotten he regrets. This is the life of people working in publishing. It is hard to read other things than what we have to read.

Way Out – Jean-Baptiste reads only little foreign literature. “I can’t be curious about everything, by lack of time, I need to focus”. Thanks to some friends’ recommendations he still follow some English language authors (James Salter, Laurie Colwin, Cormac McCarthy, Nicole Krauss… and the authors belonging to the non-sens movement such as Robert Benchley, Stephen Leackock, Will Cuppy, Roger Price…). These last few years, Jean-Baptiste also started to read graphic novels. It is his wife who initiated him to the 9th art. He started with American authors such as Joe Matt, Daniel Clowes, Chester Brown, Adrian Tomine. He shows us some of his beautiful latest acquisitions. “These books are as good as a 200 pp novel” he concludes.

A FEW BOOKS TO BORROW FROM JEAN-BAPTISTE:

In One Head and Out the Other, Ballantine: this hilarious book originally published in 1954 is presented by its author as a bible of Avoidism. “Irresistible for the ones who like to laugh!”

The Counterfeiters by André Gide, Knopf: “an important classic novel.”

Lucille by Ludovic Debeurme, Topshelf: It is the moving, emotionally raw and dark story about two alienated teenagers who, amid a torrent of personal and familial conflicts, find an instant connection and first love.